Nitrogen and carbon isotopes in conodonts : Evidence of trophic levels and nutrient flux in Palaeozoic oceans 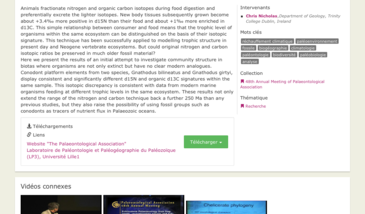 Animals fractionate nitrogen and organic carbon isotopes during food digestion and preferentially excrete the lighter isotopes. New body tissues subsequently grown become about +3.4‰ more positive in d15N than their food and about +1‰ more enriched in d13C. This simple relationship between consumer and food means that the trophic level of organisms within the same ecosystem can be distinguished on the basis of their isotopic signature. This technique has been successfully applied to modelling trophic structure in present day and Neogene vertebrate ecosystems. But could original nitrogen and carbon isotopic ratios be preserved in much older fossil material? Here we present the results of an initial attempt to investigate community structure in biotas where organisms are not only extinct but have no clear modern analogues. Conodont platform elements from two species, Gnathodus bilineatus and Gnathodus girtyi, display consistent and significantly different d15N and organic d13C signatures within the same sample. This isotopic discrepancy is consistent with data from modern marine organisms feeding at different trophic levels in the same ecosystem. These results not only extend the range of the nitrogen and carbon technique back a further 250 Ma than any previous studies, but they also raise the possibility of using fossil groups such as conodonts as tracers of nutrient flux in Palaeozoic oceans.