The "Avins event", a remarkable highstand at the end of the Tournaisian. Its influence on the global distribution and on the evolution of the Viséan rugose corals 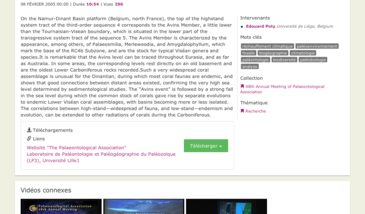 On the Namur-Dinant Basin platform (Belgium, north France), the top of the highstand system tract of the third-order sequence 4 corresponds to the Avins Member, a little lower than the Tournaisian-Visean boundary, which is situated in the lower part of the transgressive system tract of the sequence 5. The Avins Member is characterized by the appearance, among others, of Palaeosmilia, Merlewoodia, and Amygdalophyllum, which mark the base of the RC4b Subzone, and are the stock for typical Viséan genera and species.It is remarkable that the Avins level can be traced throughout Eurasia, and as far as Australia. In some areas, the corresponding levels rest directly on an old basement and are the oldest Lower Carboniferous rocks recorded.Such a very widespread coral assemblage is unusual for the Dinantian, during which most coral faunas are endemic, and shows that good connections between distant areas existed, confirming the very high sea level determined by sedimentological studies. The “Avins event” is followed by a strong fall in the sea level during which the common stock of corals gave rise by separate evolutions to endemic Lower Viséan coral assemblages, with basins becoming more or less isolated. The correlations between high-stand—widespread of fauna, and low-stand—endemism and evolution, can be extended to other radiations of corals during the Carboniferous.