From flying reptile to marine turtle: the « pterodactyl » from the Chalk of Lezennes-lez-Lille 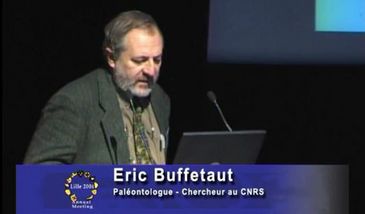 In 1874, Charles Barrois reported a pterodactyl tibia, from the White Chalk (“Craie blanche”) which was then exploited in underground quarries at Lezennes (now in the suburbs of Lille). He referred it to Pterodactylus giganteus, a species from the English Chalk. Although no detailed description or illustration was provided, the occurrence of a pterodactyl in the Coniacian Lezennes Chalk was repeatedly mentioned in papers on local geology, as well as in lists of French pterosaurs.A re-examination of the specimen (Musée d'Histoire Naturelle de Lille, MGL 4158) shows that it is an elongate, more or less cylindrical non-pneumatised bone with poorly differentiated articular ends, which bears no resemblance to pterosaur tibia, nor to any other element of a pterosaur skeleton.Comparisons reveal that the so-called pterosaur tibia from Lezennes is in all likelihood a phalanx of a marine reptile. Among Late Cretaceous marine reptiles, plesiosaurs have proportionally much shorter phalanges. In mosasaurs, the phalanges are elongate but more hourglass-shaped than the specimen from Lezennes. The greatest resemblances seem to be with phalanges of marine turtles, which show a comparable degree of elongation and proximal and distal expansion. Incidentally, a turtle shell is known from the Lezennes Chalk.