Assessing the Evidence for Extensive Wildfires at the Cretaceous-Tertiary Boundary 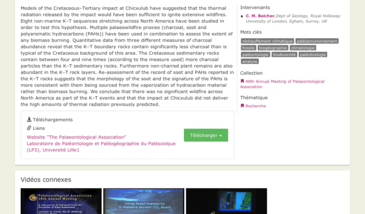 Models of the Cretaceous–Tertiary impact at Chicxulub have suggested that the thermal radiation released by the impact would have been sufficient to ignite extensive wildfires. Eight non-marine K–T sequences stretching across North America have been studied in order to test this hypothesis. Multiple palaeowildfire proxies (charcoal, soot and polyaromatic hydrocarbons (PAHs)) have been used in combination to assess the extent of any biomass burning. Quantitative data from three different measures of charcoal abundance reveal that the K–T boundary rocks contain significantly less charcoal than is typical of the Cretaceous background of this area. The Cretaceous sedimentary rocks contain between four and nine times (according to the measure used) more charcoal particles than the K–T sedimentary rocks. Furthermore non-charred plant remains are also abundant in the K–T rock layers. Re-assessment of the record of soot and PAHs reported in the K–T rocks suggests that the morphology of the soot and the signature of the PAHs is more consistent with them being sourced from the vaporization of hydrocarbon material rather than biomass burning. We conclude that there was no significant wildfire across North America as part of the K–T events and that the impact at Chicxulub did not deliver the high amounts of thermal radiation previously predicted.