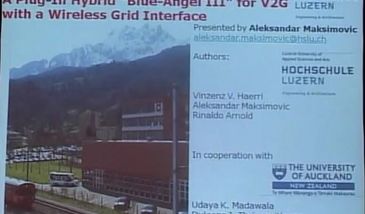 Vehicle to grid (V2G) concept is becoming increasingly popular, but it essentially requires some form of a power interface between the electric vehicle (EV) and the grid. In contrast to wired power interfaces, a user-friendly and secure wireless interfaces with no physical contacts are preferable. This paper presents a V2G system that comprises of a plug-in hybrid vehicle, called Blue-Angel III, and a wireless power interface for grid integration. Blue-Angel III uses a Li-Ion-Supercapacitor energy storage and a wireless power interface, which is based on inductive power transfer (IPT) technology, facilitates the power exchange between the grid and Blue-Angel III. This paper details the structure, control, energy storage and management, and communication protocols of the hybrid Blue-Angel III, and discusses design aspects of the 2kW bi-directional IPT power interface of the proposed V2G system. Simulation results under various conditions are presented to show that the proposed wireless and bi-directional IPT interface is ideal for the grid integration of Blue-Angel III and EVs.