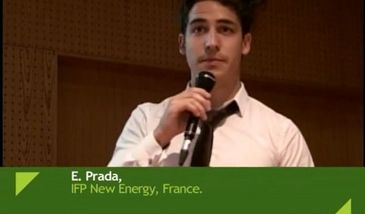 The technical and commercial success of hybridelectric vehicles (HEV) and plug-in hybrid-electric vehicles (PHEV) is strongly related to the security, cost and lifetime of the traction battery. Temperature is one of the most significant factors impacting the security, performance and life of an electrochemical battery. Regardless the cooling system adopted, the essential issue is to control the temperature gradient within each element in addition to the temperature profile across the entire energy storage system. An underestimation of internal temperatures would lead to non-uniform material ageing, but would also increase the risk of thermal runaway for some Lithium-based battery technologies. In this work, an original 0D impedance-based hybrid thermal/electrical model is developed, validated against experimental data and coupled with radial and axi-symmetric 2D model taking into account geometrical properties of a commercial cylindrical LiFePO4/Carbone 2,3 Ah cell.